THIS PAGE IS UNDER REVISION. SORRY FOR THE MESS!

(modified from Constantinople by Night, pp. 77-78)

A storm gathers about Constantinople. The Gangrel family, led by Thomas Feroux has sworn to protect the city, and to ensure the safety and prosperity of the family’s patrons, the Obertus Tzimisce. Since the Baron’s arrival over a century ago, the Gangrel have become indispensable to the security of the Dream. Their contacts among the clan, both in the East and the West, allow them to transport Cainites from one end of the Byzantine Empire to the other, while simultaneously ensuring the safety of Constantinople.

Furthermore, the Gangrel have come to see themselves as not just the protectors of the Obertus, but also the guardians of the Dream. During the troubled times leading up to the rise of the Comneni Dynasty, Baron Thomas formed the opinion that the Antonians, long the self-appointed militant arm of the Trinity Family tree, had become too preoccupied with their petty intrigues, while the Michaelites had grown too effete and lost in their worship of their Patriarch, and the Malachite family were too few. In light of this, he petitioned his then-mentor, the far more diplomatic Symeon, to raise the delicate matter within the Quaesitor Tribunal, and the vote was carried. The decision made, he ordered his followers to begin patrolling the city to enforce the Codex of Legacies. In the decades since, the Gangrel of Constantinople have developed a reputation for harshly policing the city, and their methods have only grown more draconian since they lost their mandate over the Latin Quarter as a result of the Eighth Council. Simmering tension exists between the Baron’s Gangrel and the Latins now, and it is only a matter of time before the added pressure of the 4th Crusade leads to blood in the streets.

Recognised as Scions of the Obertus during the Seventh Council of AD 1081, the Baron’s Gangrel make up one of the largest families. Many of them, however, do not reside in Constantinople. Instead, they travel across Eastern Europe and the Near East on various missions. The Baron grants his people freedom, yet upon the Embrace each shares blood with Symeon in a baptismal ceremony. The Baron’s network of Cainites keeps him informed of developments inside and outside the Byzantine Empire.

The family’s primary responsibility, however, is the protection of Gesu and the Obertus monasteries, a task it fulfills with almost religious fervour. Indeed, it is known among the families that if one absolutely has to find one of the Baron’s Gangrel, all they need do is approach the Monastery of St. John Studius or the Church of Christ Pantokrator, and the Gangrel will find them. Contrary to their barbaric reputation elsewhere, the Gangrel look with awe upon the wealth of knowledge they guard. The Baron also enforces the Codex of Legacies throughout the city, and his followers are particularly assiduous in patrolling the limits of the Latin Quarter, hoping to punish the arrogant Latins for their transgressions.

In keeping with the Baron’s Norman background, his family is feudal in organisation. Thomas is the ruler of his clan, and he grants titles to his subordinates, assigning them places within the family hierarchy. Baron Thomas is Knight Commander, and he is served directly by three Knight Captains, Urbien and Justinian and Ioannis Tarchionates. These in turn are served by a number of senior knights and junior squires. Once every three years, the Baron’s Gangrel journey from all over the empire to Constantinople to share news and stories and renew their oaths of fealty. Thomas is the only Gangrel normally allowed to sire in Michael’s city. However, numerous members of the Greek Gangrel bloodline serve him, and he has been known to grant permission to them to take a prospective childe outside the Domain, Embrace them there, and return with them, where he will then formally adopt them as his own. This privilege is granted as a reward on very rare occasions. So far, the feudal order that the Baron applies to his family has served him well, mainly for its ritualised traditions and oaths of fealty, which appeal to the instincts of the warriors that follow him. 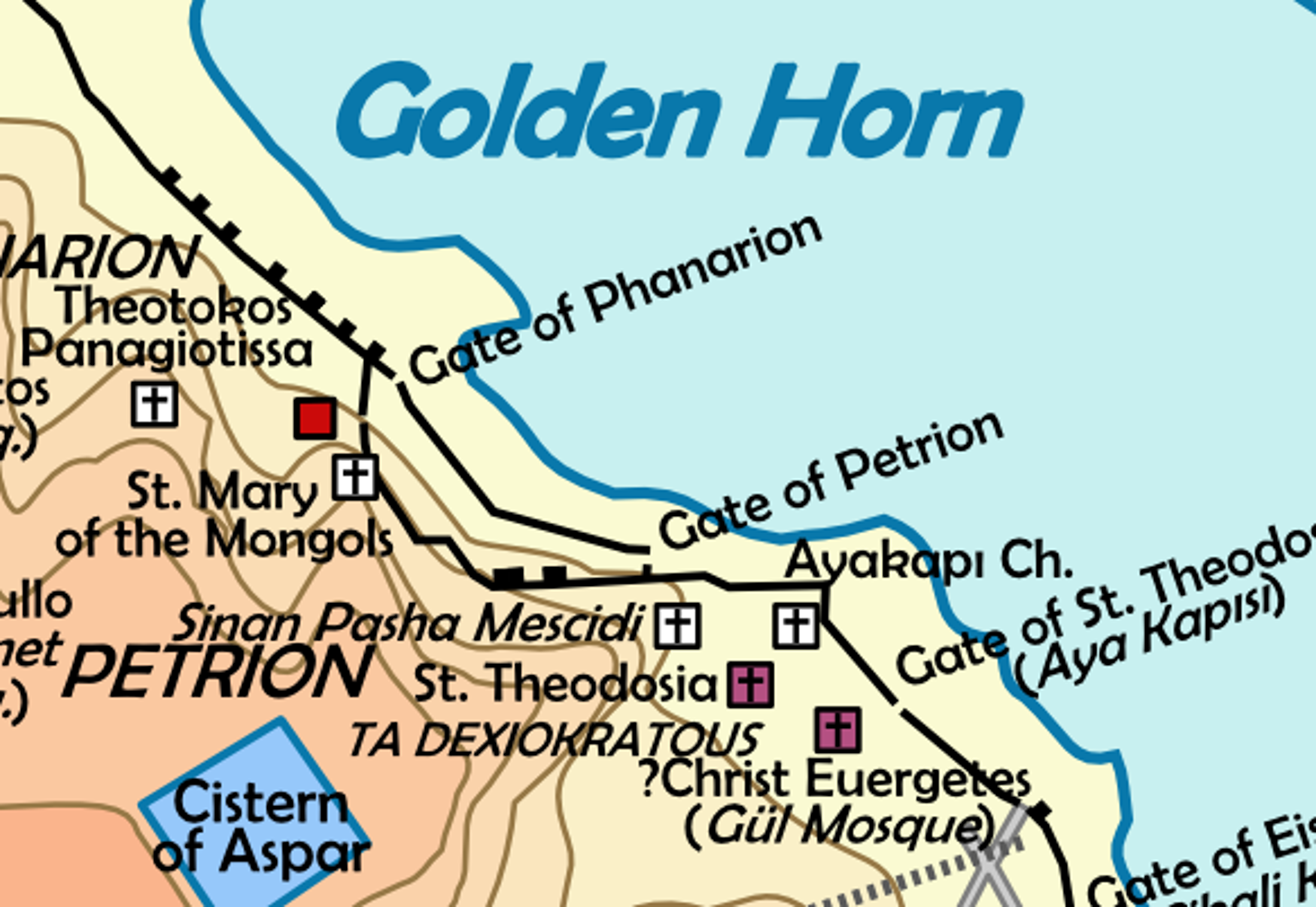 The headquarters of the family can be found at the Citadel of Petrion, a fortification along the Sea Walls of the Golden Horn. It exists within a double line of walls, anchored at one end by the small, fortified lighthouse of Phanarion and a formidable gatehouse of the same name, and by the more decrepit gate of Petrion at the other. A single inner gate, called Diplophanarion, grants access to the neighbourhood of Petrion. Immediately south and west of the Gate of Diplophanarion, the ground climbs steeply, and among the humble dwellings of traders and craftsmen can be found a church and monastery dedicated to St. Eustolia. Standing almost directly across from the gate, it has been thoroughly infiltrated by the Obertus monks and the Baron’s Gangrel, and not a few of the residents within serve among the herd of both families.

The Citadel of Petrion itself is kept intentionally run-down, at least to outward appearances. In truth, it is of stout construction, maintained both by funds raised by John Tarchionates and by the beneficence of Symeon. Within the walls it consists of a barracks, a stables, and a smithy, and numerous secrets doors and tunnels allow ingress and egress from the structure. At any one time, every one of the Baron’s vampire vassals has a subterranean cell given over for their exclusive use, and many of them choose to use their proficiency with the Protean discipline to earth meld into the dirt floor of these rooms each morning. At least a score of ghouled city guards, and many more enthralled animals, also dwell within the fort.

Since the turn of the 12th century, and especially since the likelihood of the 4th Crusade’s path loomed ever closer to the city, the numbers of Gangrel loyal to Baron Thomas has been steadily growing. Many worthies have existed among their number since the inception of the family, and while a good number of these Cainites have since moved on to their own ambitions, they remember their oaths, and they answer his call. Although the youth of the family means that there are relatively few provincial scions that answer to the family, the relative cohesion of the Greek bloodline, their pride in the Byzantine capital, and their personal respect for the Baron, has fostered a number of alliances. Justinian has been busy in recent years, moving between provincial capitals to recruit fresh faces, remind old ones of their roots, and forge new alliances with Byzantine broods. As a result of these efforts, some 20 Gangrel now stand ready to defend the city at all times, and half that number again have promised to make themselves available in very short order indeed, should the Baron call.

RELATIONS WITH OTHER FAMILIES

Due to the pressure that the Latins exerted during the Eighth Council of AD 1185, the Baron and his Gangrel lost power in the Latin Quarter. As a result, Bishop Alfonzo and his rivals among the Pisanos, Genoese, and Amalfitans were able to invite vast numbers of Cainites into their restricted demesnes, more than doubling the undead population of Constantinople. This angers Thomas because it is an insult to the hard work that his Gangrel have performed for a century, and also because of the pressure that it places on mortal population’s health and the Codex of Legacies. Baron Thomas blames the Antonian Ventrue for this development, because it was their weakness and disunity that allowed the Latins to gain so much power.

Unwilling to allow this disastrous state of affairs to continue, in frustration Baron Thomas has publicly broken with the sacred old order, deriding the failure of the Antonians and the inactivity of the Michaelites. In several political stand-offs, he has publicly aligned himself with Autokrator Natalya of the Lexor Brujah, and he also appears to be working closely with Malachite on political matters too. Those in the know understand that a new power bloc has formed. Interchangeably referred to as the Covenant of Three or, more sarcastically, as the New Trinity, this extended coterie now drives much of the purpose in the defence, maintenance, and ultimately the hoped for recovery of Constantinople.

Years ago, Baron Thomas’ agents abroad reported the likelihood of the Fourth Crusade, and the possibility that they would take the land route through the Byzantine empire. The Baron knew that the state of the provinces was too unstable to permit this, and he warned the ruling families that they should make preparations. Their reaction was, at best, half-hearted. The Antonians immediately began a lengthy process of debate regarding which of them should go to Venice, resulting in political paralysis that still had not settled the matter by AD 1202.

Unwilling to risk use of the politically ineffectual Antonian Ventrue, he sent his own representative to Venice in an attempt to deflect the Crusade. Anna Sgorina was quick to admit that she was inadequate to the task, but did her duty nonetheless. Thomas listened to her advice, and called upon other contacts to supplement her influence. The Crusade is reportedly headed to Egypt, but news has now reached Thomas that the Dalmatian city of Zara was recently sacked and handed over to Venice. In response, he has sent word to his followers in the provinces, led by Knight Captain Justinian to watch the Crusade closely, and be ready to act against them if needs be.

Also, the Gangrel no longer have freedom to persecute and try all Cainite offenders of the Codex of Legacies. Together with the large numbers of new arrivals in the Latin Quarter, this has placed extraordinary strain on the rule of law and order in the city. Two of his squires were murdered near the Genoese Quarter in AD 1199, and one of his knights, Niketas, disappeared outside the Saut Aswad in 1201. Investigations into these crimes have yielded no results thus far, as the resources of the Baron’s Gangrel are stretched far too thinly. Baron Thomas suspects that Bishop Alfonzo has an Assamite in his employ, but does not have the authority to even question him. A shadowy war is in the offing between the Narsene Lasombra and the Baron’s Gangrel, and only a fool would dare be caught out of bounds in this charged climate.

The Baron’s Gangrel have always attracted those Canites with a sense of honour and bravery. The family’s feudal nature promotes a strong sense of belonging, and its duty to protect the Cainite monks only furthers this sense of community. Outsiders are welcome among the Baron’s Gangrel, so long as they are prepared to take Baron Thomas and Lord Symeon as their feudal superiors, prove their dedication to upholding the Codex of Legacies, and swear to defend the Obertus Order and their magnificent library unto the Final Death. Having said that, a number of the Baron’s Gangrel, led by Urbien the waif are particularly distrustful of Gangrel of the Frankish and Latin persuasion, and will make their lives difficult until they have proven their loyalty.