Equal parts wise-woman, prophet, charlatan and scholar of mysteries, this self-admitted meddler wanders the fringes of Europe looking for ways to ameliorate the worst excesses of the Children of Caine and better the lot of the kine.

A twisted, bent old woman with thin hair and pinched features. She is swathed in heavy clothing and leans on a walking stick that is topped with a silver skull.

Durga Syn has said little of her past, save that she was once a sorceress and priestess of the old, pagan faith of the north. She claims to have had much congress with the fyeĭ narodnaya, or fae folk, in the past, though it is unclear whether this was before or after the Embrace. She also speaks authoritatively regarding the Lupines, the natural spirit world and, of course, the legends of the Children of Caine. On this last subject, she has displayed a considerable knowledge of the workings and names of ancient Cainites, including whom the author of the clay tablets found at Tihuta Pass may have been. Durga named no less than five Cainites that had used the name of Ashur in the past, though the most intriguing were Cappadocius, Saulot, Tzimisce and Shaitan, one of the progenitors of an obscure bloodline known as the Baali.

Durga met the coterie when she rendezvoused with her clan-mate, Vassily Taltos, outside the tower project. With a wry twinkle in his eye, the playful Vassily introduced Durga Syn as an ancilla of the Berehynia jati, which appears to be friendly with that of his own Alexandrite caste. However, the level of respect and deference that he extended to Durga was far more appropriate to an elder, and she certainly indicated that she had seen centuries of existence.

Durga and Maude seemed to enjoy each other’s company immensely. The Cappadocian was particularly amused when her fellow crone called her “young lady.” Durga Syn’s kind treatment of the mortals attached to the tower project, as well as those of Vassily’s and her own kumpaniya’s, further endeared the Ravnos elder to Maude. The young meddler and the old seemed to be inclined to work together on a number of matters in the future.

They travelled together extensively throughout the north and east in the years afterwards. First-hand, Maude had the opportunity to see some of the activities of the most brutal and evil Cainites in existence, as well as the conduct of some of the best. The experience left the young Cappadocian with the distinct impression that Durga Syn’s true brilliance was in seeing the long view, and strategising the best way to affect it. Her capacity to accrue boons now, whether by means fair or foul, with an eye towards expending them later to assist the greater good, was truly enviable. Ultimately, while their ends were the same, Maude preferred her own road, though she was quite content to be used by the far-seeing Durga Syn from time to time.

Embrace: Unknown. Durga Syn is deliberately mysterious and even misdirective concerning how long she has been a vampire. At times, she has hinted that she was brought across some time in the middle or towards the end of the 10th century, and at others indicated intimate knowledge of people and events from as early as the 3rd century. Maude has said that Durga was one of the magi before her Embrace, so perhaps she lived for centuries even before the Ravnos of the Berehynia made her one of their own.

Lineage: Childe of either Vladavos or Rodina; a member of the Berehynia jati. Durga Syn likes to keep her generation mysterious, and is speculated to be anywhere between the 5th and the 7th generations. 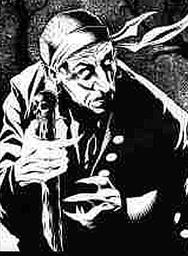