A Roman legionary who served under Julius Caesar himself, this ancient Gangrel is rarely given his proper due because of his comparatively weak generation for one of his years. He has a reputation for being an arrogant loner.

A tall, powerfully built man with broad shoulders and square, rugged features. His hair is brown, speckled with grey, and worn short. He has rich, dark brown eyes and a deep, commanding voice. A very faint scar runs along his right temple. He wears a heavy fur cloak and dresses in the finery of a wealthy merchant or perhaps a minor noble, and he is armed with an antique sword and dagger.

Lucien speaks little of his mortal years, except to say that he served under the Julius Caesar in the Gallic campaigns and has never met another man, nor Cainite for that matter, who was Caesar’s equal. He also does not speak much of his Embrace, except to say that he was Embraced by a monster who embodied everything that is wrong with Clan Gangrel. Lucien and his late, loyal childe Bernhard slew this “Savage” (known as Velatorix the Averni to those bestial Gangrel who revere his memory) at the turn of the 12th century, and he makes no bones about speaking of this act with great satisfaction. His admitted kin-slaying does little to endear him to his own clan, which is already at a loss to make sense of his strange ways.

He also speaks little of his time in the Roman Empire, but it is clear that he only rarely travelled to the capital itself and instead spent much of his time on the borders aiding this Roman legion or that in holding back the barbarian tides. Lucien has mentioned, however, that Julia Antasia was his mentor for many years, and that she is responsible for keeping him sane in his early centuries. To this night he still maintains property near Frankfurt and journeys there often to speak with her and other followers of the via humanitatis. Lucien is also great friends with Petronius, the former Arbiter and Quaesitor of the Michaelite Family of Constantinople, and he visited that city very frequently

indeed, for in better times the lightness and wit of the poet did much to buoy the old soldier’s spirit against the weight of his years. Indeed, judging from his advice to the Concord, despite his profound interest in the developments of military equipment, strategy, tactics, and logistics, for the most part Lucien tries to stay out of the conflicts that dog the Children of Caine, and recommends that others do the same. Instead, he is a great believer in finding healthy obsessions in families of mortals, carefully husbanding their growth and prosperity over generations. Until recently, he had watched over the von Manheim family for no less than 8 generations, but since the turn of the 13th century he has made the Dresslers his latest project.

Apparently this was not always his way. When the Concord took their part on the pilgrimage of the Fourth Crusade, they met a Gangrel elder and admitted diablerist who called himself Rollo. The Frank claimed to be descended from Lucien through his sire Clothilde and grandsire, Sieglbert, both of whom went to the Final Death caught up in the failed intrigues of the old Roman in the early part of the 9th century. At the time, Rollo himself was simply discarded as unimportant and beneath Lucien’s notice, and he has always dreamed of revenging himself on his ancestor. Now stronger in the Blood because of his crimes, Rollo claimed that he had joined the Militi Christi in hopes of expunging his sins, but after discovering that Lucien was in Constantinople he wished nothing more than to hunt down his ancestor to exact a reckoning. It is unknown if Rollo did find Lucien before or during the Great Sack, but if he did the tale would be interesting, for the Frankish diablerist survives yet, and is reportedly still active in the Byzantine remnant states.

Lucien’s main interest in Eastern Europe has long revolved around shoring up his mercantile contacts along the Danube, for despite his desire to “stay out of things” the old Roman guards his small trade empire jealously. Around the turn of the 13th century, however, he became swept up in the struggle to protect and rejuvenate the Dream of Constantinople at the request of Petronius. He was officially adopted into the Michaelites in AD 1202, and he was quite active in helping his old friend restore order to his house, reforming a small number of the Toreador Family to a good measure of effectiveness. Unfortunately, it was too little too late, for the writing was on the wall for the city the moment the “Incognitus” bent their will towards subborning the Fourth Crusade and redirecting it to the Queen of Cities. After after the fall of the Queen of Cities in AD 1204, it was Lucien who arranged for the stricken Petronius’ hidden sanctuary.

He was also extremely interested in aiding his childe, Bernhard Billung, in establishing domain in Kronstadt. Their bond was close, even for a sire and childe, and they often referred to each other openly as father and son. While Lucien accepted the news of Bernhard’s fall in battle with Timur the Warmaster with his customary stoicism, he also made it clear that his son was not gone until he saw his remains, or dealt vengeance to those responsible. He scouted the Voivodate of Vranca often in the years afterwards, searching for a back way into the cavern system that Koban used for his lair, and he stayed in touch with a number of Gangrel allies such as Justinian, who promised they would assist in drawing the Tzimisce villain to account when opportunity arose. Lucien is cunning, and has the patience that only 1000 years of life can foster. The “Savage” learned this the hard way, and he vowed that so too would Koban.

Meanwhile, he took control over Bernhard’s old domains of Sankt Wolfgang and Lünedorf, so that he might watch over the Dressler family. He had known Karl well when he was but a youth, and Lucien came to adore the gentle edler’s family in the years to come. In particular, he took a shine to Axel, Karl’s second son, making sure to cultivate the young man’s sharp mind.

Then the Cuman Gangrel known as Kordönül Khan arose in Muntenia, gathered the aggressive northern clans of his people throughout 1207, and began a brutal war to subjugate the area south of the mountains between the Danube, the Olt, and the Black Sea. After defeating and coopting many other Cuman clans, in 1210 he then crossed the mountains and attacked the Székelyföld and then the Burgraviate of Kronstadt. In the first weeks of spring, Lucien was one of the first Cainites for whom Kordönül came.

The warlord attended to the matter personally, leading no less than 6 vampires and 50 experienced warriors against the walled village of Sankt Wolfgang. Only Erzebet, his Tzimisce student, was available to assist the old Gangrel in the defence of his home, and he bade her lead the defenders of the palisade while he ventured forth. The Cumans were surprised at the strength of the paiisade, and the efficacy of the well-drilled defenders. Curiously, Kordönül appeared to hold back and study Lucien from afar as the elder systematically outsmarted, isolated, and destroyed 4 of the khan’s 6 Cainite followers, including Kuyuk, one of his strongest champions. Seemingly satisfied with the result, the khan then withdrew, taking the remnants of his small army with him. He did not trouble Lucien’s domains again.

The rest of the burgraviate was not so fortunate. By high summer, the ability of the Kronstadters operate in any manner save strictly defending their redoubts was broken, and Kordönül and his Cumans ran roughshod throughout southern Transylvania, free of rein to raid and plunder at will. The southern reaches of the Székelyföld all but fractured under the cruelty of his assault, while the burgraviate was soon hard-pressed enough to inspire King András II to gift the land to the Teutonic Order in hopes of stemming the threat. The first Teutons, among them the secret vampire sub-order of the Knights of the Black Cross, began to arrive in the Burzenland in 1211.

Despite the conflict of many years previous between the servants of Jürgen von Verden and his late childe, Lucien elected to make an accommodation with the Swordbearer. He and his villages would be an island of independence within the realm of the Burzenland, allied to it but separate. Additionally, he would be free to hunt within the bounds of Kronstadt itself. In return, Jürgen would have the benefit of his excellent birdseye knowledge of the region including the heights of the Carpathians and their passes, the Székelyföld, Muntenia, the Vranca, and the Burzenland itself. Furthermore, he would act as a scout for the Teutons, giving them advance warning of the movements of the Cuman raiders. And finally, he would make himself available with his millennium of military knowledge to advise against the brilliant stratagems of the CeribasI.

The alliance allowed the Swordbearer and his followers to quickly develop strongholds on the borders of the Burzenland that soon restricted much of the movements of the mortal Cumans. Of course, Kordönül Khan and the stronger of his Gangrel followers could not be countered so easily, but the denial of ground to the hordes of the CeribasI was profoundly effective. By the end of 1212, the Burzenland was once again approaching security, and a year later, the Swordbearer was able to begin his preparations to invade Muntenia and bring the fight to the Cumans on their own ground.

For the remainder of the Cuman War, Lucien was good for his word. He provided invaluable scouting intelligence, and Lord Jürgen’s strategy for building fortifications from west to east came directly from the Roman, a product of wisdom bought from hard years fighting border wars first against Scythians and Sarmatians, and then the Huns. He was also present throughout several of the final night battles against Kordönül’s vampire followers.

Throughout the years after, the old Gangrel has returned to his passive stance, watching over the Dresslers and the folk of Lünedorf and Sankt Wolfgang. For the most part he does not appreciate visitors other than his strange student, Erzebet, but the personable Nosferatu Sága has gradually worn him down over the years. She did so by appealing to the natural storyteller in him, and by embellishing and retelling those tales in grand ways. Increasingly, she finds herself welcome to visit his house at the village of Sankt Wolfgang at her pleasure.

Embrace: 54 BC. Bernhard has said that his sire told him that he was Embraced in Belgica, in the land of Eburones, after being felled in an ambush and left for dead. When Lucien confronted and called out the Incognitus assassin Publius Messorius Fidus (aka Jerome da Foggia) during the Great Sack, the villainous dandy mockingly bowed and greeted the old Gangrel as Lucius Aurunculeius Cotta.

Lineage: Childe of “the Savage”(d), known in some circles as Velatorix the Averni; he considers his lineage a sore point, and will not discuss it beyond saying that he destroyed his own sire. He is of the 8th generation. 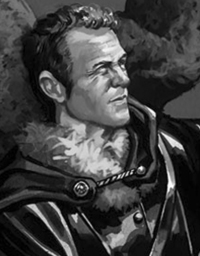