A senator of the Lexor Brujah, this secretive ancilla and his agents are active in the lands from Hungary to Outremer, attempting to seed and foster their sway among the cities and nations of the East. He is the unoffical second of Natalya Syvatoslav.

A muscular, middle-aged Greek with a pale olive complexion, wavy black hair speckled with grey, hard brown eyes, a prominent nose and a strong jaw. He is dressed in simple robes of Byzantine cut, and is armed only with a knife.

(Expanded from the character and information as presented in Chicago by Night, p. 24 & 68, and the Unofficial White Wolf Wiki)

The redoubtable Procet is a native of Constantinople, and has been active among its Cainite denizens for centuries, but as an inveterate traveller even as a mortal it is unknown who his actual sire is or where he was Embraced. It is known that he was adopted by Autokrator Tribonius and inducted into the Lexor Brujah upon his arrival in the city in AD 1021, and he was a loyal, though frequently absent, gerousiastís throughout the many years afterwards. His chief interests lay abroad, in fostering the Justinian Code and the Dream throughout the far-flung satellite cities of the empire, and serving as something of an agent in the intrigues of his adopted sire. He served Tribonius well as envoy to his colleagues among the Praedicanda of Hellas, as well as to those Lexor Brujah that had moved on to establish their own demesnes and bloodlines throughout the region. For much of the 11th century, he travelled in the company of Natalya Syvatoslav, and they both look upon those journeys as the best of their many years. They became lovers for a time, and although their romance has long since cooled, their loyalty to each other remains unshakable.

When the news of the Latin Riots of AD 1182 reached him in Hungary, he made his way to Byzantium, and he was present for the subsequent trial and execution of Tribonius during the 8th Council in 1185. Procet railed against the injustice of the proceedings, for it was obvious that his adopted sire and the Antonian Domestic Prefect Epirus were being made scapegoats for an ill-advised machination. He could do nothing, though, save bear witness with his fellow senators as Tribonius was staked out to meet the dawn. The loss of their beloved mentor and autokrator threw the Lexor Brujah into disarray. Natalya struggled to fill the late Tribonius’ role while her brothers-in-blood Theophilus and Dorotheus withdrew from Cainite affairs for the most part, resentful of their late sire naming her his successor. The remaining Lexor gerousiastés floundered, the influence of the family was much weakened, and the resulting chaos to the Byzantine bureaucracy was disastrous. In response, Procet stepped up his own profile in the capital, and threw his dynamic support firmly behind Natalya as the new autokrator of the family.

His secretive schemes and far-flung information sources dramatically raised her status in the city, yet he was still often absent from Constantinople himself. Nevertheless, his dynamic presence was noted in the last few decades before the Family system collapsed. His progeny, a formidable knight of Outremer known as Sir Conrad de Monreal was Embraced specifically to provide the senators with a strong right arm, but an ancillary motive was to provide some insight into the chivalric mindset that was impenetrable to the Romaioi senators, for many Latin mercenary knights came to serve the city and Procet saw that they were a resource being neglected by all parties. In the late 1190s both he and Conrad were absent from the city, and the rumour mill of the Great Palace had it that they were seeing to tying up his loose ends in Bulgaria, Serbia, and Hungary. They had returned to the city by 1202, where they became embroiled in the work of the Covenant of Three.

Throughout the events surrounding the 4th Crusade’s diversion to and attacks on the Queen of Cities, Procet remained pragmatic in his approach. His reputation as a plotter and intriguer did him no favours in pursuing a diplomatic role, so he instead trusted his allies among the Concord and strengthened his ties to the Baron’s Gangrel and the Malachite and St. Ladre Nosferatu. This he accomplished by using his shipping contacts to assist in moving the texts of the Library of the Forgotten and preparing for the resumption of war with the Latins, which he saw as unavoidable. Obviously, he was correct in his assessment. Notably, Procet fought against the crusaders as their attack of the 9th of April, AD 1204, dragged on into the night.

When the Sea Walls fell several days later on the afternoon of the 12th, the crusaders entered the city and the tragedy of the Great Sack unfolded. On that first night, Procet fought the enemy where he found them, but like all the other defenders of the city by midnight he was confronted with the reality that the fight was lost. He fell back to the cisterns and tunnels that had become the secret ways of the Covenant of Three, only to find Baron Thomas in a rage. The Gangrel had been unable to save the Monastery of St. John Studius from the torches of the crusaders, and Gesu was dead! Word had reached them too of the unthinkable: Patriarch Michael too had met the Final Death! To belabour the strained sanity of the baron, he had also discovered that Malachite had already deserted the city a week earlier and had left one of the Lazarene knights, Fra’ Osmund, to impersonate him to his own allies among the Covenant. He snapped and attacked Osmund, who survived only through the intervention of Procet, Sir Conrad, and several other members of the Concord.

Natalya sought to rein in his temper too, but the baron was mad with grief and the perceived betrayal of their allies. He declared the Nosferatu of the city to be anathema, every bit the enemy as much the Cainite Crusaders, and he commanded the remanants of his family to gather for a counter-attack on all the enemies of the Dream. She and Procet realised that the Covenant was broken. Together with Aristarchus they left the city that night, following the secret ways by which they had smuggled out so many, but far too few, of the tomes of the Library of the Forgotten. Sir Conrad elected to remain behind to help the Nosferatu and the helpless kine of the city, and Procet gave his blessing to the knight’s mission.

They made their way to the western provinces to take stock of their resources and make plans. Within twelve months, Michael Comnenus Ducas had organised elements of the exiled aristocracy and military into the Despotate of Epirus and Natalya, Aristarchus, and Procet followed the mortal potentate to his newly declared capital of Arta. However, after the despot settled a great many of the influential refugees in the newly fortified town of Ioannina some forty miles to the north of the capital, the Lexor family transplanted themselves to that settlement in 1207. In the years to come, they would expend much of their efforts to see Michael succeed and it is said that behind the veil of the Silence of the Blood, the autokrator became a personal friend and advisor to the despot. The strategic location of the “military capital” of the realm was quite useful to lobby other Brujah potentates in the region to fall in behind the autokrator in order to meet the vampires of the new Latin Empire as a united front.

Over the following years, Procet continued his role as Natalya’s primary advocate, travelling between the courts of the despotate to strengthen cooperation between the disparate, selfish princes and to recruit their ancillae and neonates. The strategy worked admirably, for many Greek Cainites take the fall of Byzantium quite personally, and they see the resurgent, reimagined Lexor family as their best hope to throw down the Latins and recover their glorious empire. Wherever he goes the Latins grow nervous, for he is known to be a dedicated foe to their dreams of raising up their new states on the bones of the Byzantine Empire. Pursuant to assisting his autokrator in her future plans, Procet has scouted out the lands of Thessaly and the Peloponnese, looking for weaknesses in the new Frankish states as well as sympathetic souls of among their own people. The success of Conrad de Monreal convinced him that bringing across worthy folk of Frankish origins might be the key to underminging those lands and reclaiming them for the future.

Procet is also heavily active in seeing the influence of the Venetians challenged along the Ionian and Aegean coasts, and he courts both pirates and Genoese privateers to see it done. In 1217, he managed to mastermind the cobbling together of a fleet of galleys to attack the Venetian fleet blockading the Epirote possession of Durazzo, which indirectly led to the capture of the newly crowned Latin Emperor, Peter de Courtenay.

Embrace: Early in the 11th century.

Lineage: Procet’s true lineage unknown, but he was the adopted childe of Tribonius (d). As such, he is not in the habit of advertising his generation, but the Concord know his progeny, Sir Conrad, to possess the potency of the 7th generation, so Procet must belong to the 6th. 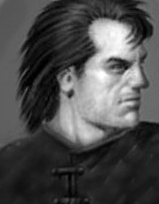